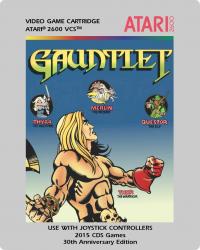 “It’s dangerous to go alone! Take this.” ­– The Legend of Zelda.

– A cool project by a programmer dude is detailed on AtariAge, as he modified Dark Chambers into a version of Gauntlet that works on the Atarti 2600! Read about his work here.

– Confirming earlier trademark and copyright work, this week Sega confirmed that they are making a new Valkyria Chronicles for the Playstation 4, and remastering the old games as well. Sega Nerds had a translation of the Famitsu article. The third game never made it to the U.S., so it’s unclear if the new game or the remastered games will either.

– Two big Nintendo items this week. There will be a female Link, Linkle, in 3DS game Hyrule Warriors, per Twitter. Also, per almost every site on the Internet, the original Pokémon games will be getting re-releases.

– Neat advertising stuff, as Gamezone has an article by Samantha Bishop on the cool, old Kay Bee Toys flyers that got posted on Flickr. And from Tech2, they have the six worst gaming ads of all-time.

– Robyn Miller, the composer of Myst, has signed on to provide the music for Obduction. It’s a new graphical adventure that is clearly influenced by Myst.

– Cool Kickstarter project: an illustrated history of game controllers from 1972 to 1989. Check out the project from Player One Books here.

– Very important business from The Chicago Sun-Times, as Chicago Bulls player Tony Snell claims to have loved playing as Michael Jordan in NBA Jam. Say what? Everyone knows Jordan wasn’t in the game! He is probably confusing it with NBA Live 2000, which was the first basketball game in ages to actually have Jordan.

– In 2000, Banjo-Tooie came out. The sequel to Banjo-Kazooie, it was also well-reviewed. The platformer was the second-to-last game that Rare did for Nintendo, before becoming a developer for Microsoft.

– Star Wars: Knights of the Old Republic was released for the PC in 2003, a few months after its initial release on the Xbox. It was an excellent RPG developed by BioWare.