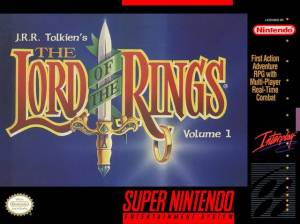 This week in Your Parents Basement, we are doing our best to survive more god damn snake bites, and wolves, even though we’re supposed to be in the Shire and Hobbiton… From 1994, we’re playing one of the worst Super Nintendo games of the era, The Lord of the Rings: Volume 1.

– Brisket’s Twitch account is available here, where you can see footage of him and Steve playing The Lord of the Rings: Volume 1. It’s really, really, really bad. It is also on YouTube, with the best part probably being the five-minute password segment here.

– As mentioned on the show, Lord of the Rings is surprisingly expensive! The loose cart goes for about $10, but the box and manual in new condition ups the price to around $100. That’s the only way to play it legally, too, since it’s too horrible to be ported.

– Surprisingly, given that every game on the Internet has a backstory written about it, there is nothing about this one. No real “making of” stuff, and it isn’t really recognized as one of the worst games ever.

– Secret of the Stars is a fringe SNES RPG. You can check it out here.

– Obitus is the worst ranked SNES RPG, but it is seemingly better reviewed for other platforms.

– You Don’t Know Jack is a splendid trivia game series, but as mentioned on the show, it used to have issues running on newer machines. However, there is a Steam release that seems to have fixed up some of those issues. The individual games run from $1.99 to $3.99, with a collection available for $19.99. There are about a million annoying “Let’s Play!” editions online, but here is a decent normal version.