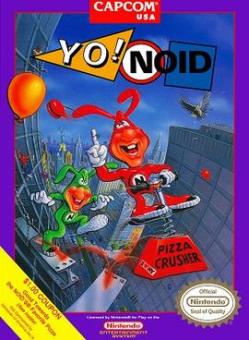 This week in Your Parents Basement, in honor of National Pizza Day we are playing as a pizza-stealer in order to save New York City, for some reason! From 1990, we’re playing Yo! Noid, developed by Now Production and published by Capcom, for the NES.

And now, there is a Discord channel for all the sweet baby boy and girl fans of YPB! Check it out here, and rub elbows with your favorite co-hosts.

Want to have an email or comment read on the air? Want to have your voicemail played? Send all mails and audio files to parentsbasementpodcast@gmail.com.

– According to Price Charting, Yo! Noid is pretty reasonably priced. The cart costs about $10, with the box and manual upping the price to $42. (And by the way – The site is now updated, and offers more information!)

– The shockingly good sequel to the game is available here.

Oh man… We took a bit of a news break the past few weeks, because of The Holidays and what not. And also, Steve is sicker than the Noid after eating Pizza Hut. Regardless though, he’s powering through to deliver the first vidya games news of 2016!

– Brad Fuller, the composer for classic games like Tetris and Donkey Kong has passed away. Develop’s Matthew Jarvis has the full story here.

– A Reddit dude posts cool images from his collection of odd gaming systems. Check it out on Imgur.

– Super Metroid is a lot of fun, and you can self-impose new difficulty challenges via sequence breaking. But if you’re a complete masochist, a new hack tilts the game on its side.

– This week’s game for James and Mike Mondays (Angry Video Game Nerd) is Killing Time for the 3DO. As one of the 20 people who own a 3DO, of course I’m linking to it.

– Ken Griffey Jr. was elected to the Baseball Hall of Fame this week. His SNES game was weird, and Tech Times’s Jason Serafino has a rundown here.

– Much like the motion picture industry, January can be a dumping ground for the vidya game industry. The most significant releases? Harvey Birdman: Attorney at Law came out in 2008 for the PS2, PSP and Wii, and Total Eclipse came out for the 3D0 in 1994.