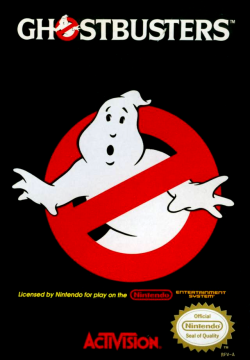 This week in Your Parents Basement, busting is NOT making us feel good! From 1988, we’re playing Ghostbusters by Bits Laboratory for the NES, which is based on an earlier Commodore 64 game.

– According to Price Charting, loose carts of Ghostbusters go for about $9.50. The box and manual will set you back about $30. However, for that price, you can buy the far superior Ghostbusters: The Video Game for the Wii, PS3 and 360. Do that instead.

– For a bunch of neat trivia, like the info on John Belushi originally being tabbed for Ghostbusters, check out this long Vanity Fair article.