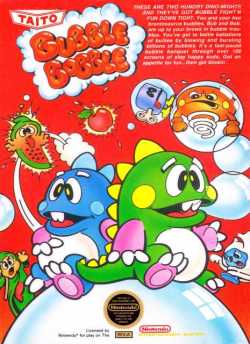 This week in Your Parents Basement, we are playing as dinosaurs as we entrap enemies and solve puzzles with bubbles! From 1988, we are playing Taito’s Bubble Bobble for the NES and Arcade. WARNING: This week’s show does not have the swears censored out!

– According to Price Charting, and mentioned on the show, the original Bubble Bobble goes for about $18 for just the cart, but shoots up to the $300 range if you want a copy in pristine condition, with box and manual. It’s available on the various Wii shops for around $5. The second game, which came out in 1993, is even worse, costing $290 for just the cart and $5,299 for a new copy.

– The oddly named Rainbow Islands is cheaper on Price Charting, ranging from $27 to $102. Although we were not really familiar with it on the show, critics ate it up, with most giving it 90-plus percent.

– Taito made its hay in the 1970s with a ton of arcade games, and its list of games is massive. It was purchased by Square Enix in 2005 though, and since then, things have of course gotten weird.